Dave Mustaine posted a teaser clip of some new Megadeth music back in November. It was hard to discern any of the guitar parts as Dirk Verbeuren made some noise behind the kit, but we won’t have to wait long before truly hearing some new material. A teaser clip has been shared by Megadeth, suggesting the first song from the new record will drop on Friday, Jan. 11.

We’re going to get ambitious and make a prediction that this song might be about war, though Mustaine told The Metal Voice that this next record wouldn’t be as political as some others have been. “I think right now that the state of affairs in the world, it’s so horrible – it’s just so horrible. People are so mean to each other,” he said, adding, “So, I’ve toned it down a little bit with the political stuff to where it’s more about being a one-world kind of people, about the stuff that affects us as people, not so much as citizens of any government or nation. Why put an unnecessary wall up between us, right?”

It’s going to be a busy 2019 for Megadeth, who will provide direct support for Ozzy Osbourne on the next North American leg of his farewell tour (dates below). The fall is looking good too with the first-ever Megacruise setting sail in October.

Is MEGADETH’s ‘Youthanasia’ DAVE MUSTAINE’s ‘Most Personal’ Album When It Comes To Lyrics? He Responds – BLABBERMOUTH.NET 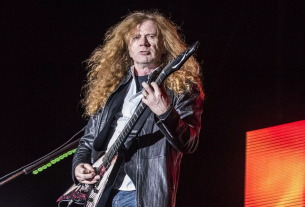