Ghost are one of 21st century metal’s biggest success stories. In just over a decade, they’ve gone from a little-known curiosity from the backwaters of Sweden to a Grammy-winning powerhouse beloved of the likes of Metallica and Dave Grohl. Their fourth album, 2018’s Prequelle, gatecrashed the Top 10 in the UK and the US – an astonishing feat for a band whose Satanic outlook is utterly at odds with everything else in the charts.

But Ghost are the exception rather than the rule. It’s been nearly two decades since metal truly dominated the mainstream. Back then it was the likes of Korn, Limp Bizkit, Slipknot and the nu-metal horde who were leading the charge. Plenty of underground scenes have come and gone since then, but none have made much impression on the world outside the boundaries of the metal scene.

Who better to give us his thoughts on the current state of the metal scene than Tobias Forge himself? We sat down with Ghost’s mastermind to talk musical ‘clutter’, the importance of mystique and whether metal will ever become a mainstream force again…

Do you think metal could break into the mainstream nowadays?

“I was never a fan of nu metal, but if I’m going to be fair and call a lot of that metal, 10 or 15 years ago that was highly mainstream. So yeah, of course. But I’m not sure that a genre is likely to break through anymore. It seems a bit more like it’s certain bands or certain artists that break through.”

Why don’t you think there’ll be another genre breaking through?

“There’s a difference in the consuming of music nowadays. People tend to listen to more diverse things than they used to. They’re a little bit more like, ‘Yeah, I’m a punk but I like the new Weeknd record’, or ‘I like Adele.’ Even if you have a record collection and a stereo at home, you might still have a digital radio in your car, or Spotify on your computer. Even though most music being made is being suffocated by the clutter, there’s also a lot of diversity spiking through the clutter, reaching certain listeners. So I think that’s why more oddballs come through, to a certain degree. But I’m not sure if people’s attention spans are lesser as well. You listen to one band, and if there’s five more bands coming, you tend not to listen.”

What makes it possible for a band to break through?

“There are many things that need to fall in place. I want to underline that now, what I just said, in terms of singular bands and all that, I’m talking about mainstream success, not underground hype. We see that all the time in the underground, bands and genres, obviously. Then it’s more genre-based. But in order to break through the mainstream, there’s so much coincidence, so much opportunity that needs to land in front of you, and you need to grab it. And then you need another opportunity that you need to grab. And then 10 others. And then when you might have risen to some sort of prominence, you need to maintain it, and top whatever you did previously. That’s why most bands fail, I think. Because it takes a lot.”

You mentioned oddballs, and there’s a lot of mystique around Ghost. How important is that?

“The mystique has aided people’s attention to the band, because I’ll keep repeating that I definitely think our image was crucial, but we would never have gotten anywhere if it wasn’t for the music. I know a lot of bands with a fucking cool image that never went anywhere because their music is not good enough. People would have got tired of the image after three months had we sucked. But the image did play a big role in terms of getting that music to cling on, and to stay with people. And I think it has to do also with our anti social media presence that I have tried to keep for the band.”

How have you tactically built your success?

“The method has been very old school. You go out and tour, and tour and tour, and then you tour even more. There’s a bit of a difference between ourselves and some friends in other bands that have stuck more to their guns; even though I firmly believe that we are a nocturnal band, we should play at night, we should play last, because we bring a fucking production, I knew six or seven years ago that there was only one way to get to that point, and that is by playing in the day and gradually moving towards the night. A few friends of mine in other bands have been unwilling to play ball with that, basically.”

How important is it to do that?

“With Ghost, we a few steps by making an album first, putting a band together after that, and then starting to play live, which is obviously the wrong way around. But quickly after that, when it came to building and having tactics, we had to play the game with the big boys, where you have to pay your dues and you have to open up, and you have to play in the day, and you have to play festivals with bands that you might not think are super-cool, and all of those things that some bands tend not to do.”

Do you think Ghost can rule the world?

“Probably not. There’ll be limitations with our image. We will never be the biggest band in the world, but we can definitely become a lot bigger. I think we can rule parts of the world, for a night at a time. That’s the cool thing about rock’n’roll; you become the king of the night-time world in a city, just for that moment, and that’s the magic of it. Then you go on and do the same thing someplace else the next day. And you have to remember that you rule tonight, and tomorrow it’s Tuesday! And people go to work.”

If we had another nu metal, do you think metal could rule the world?

“I think everything is cyclic. I do believe that rock is very much alive, and it’ll definitely come and go. I think that the chances of it dominating charts and dominating media is as thinkable for the future as it wasn’t thinkable at certain other times, so yeah of course, but I’m not sure if it’ll be a leather-clad band from Birmingham or if it might be something completely different, as in The Strokes, or bands like that. I think it will come in a new form. It might be four girls from Poland next time that makes it. Or a solo artist from Switzerland. Who knows?”

10 Most Anticipated Metal Albums of 2019 – Consequence of Sound 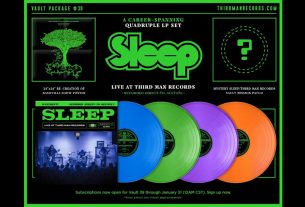